Rectifiers
Rectifier converts AC into DC.
We need DC voltages to run many of our appliances at home such as television, radio, computer etc.
Only lamps, fans etc can work on AC power directly. Therefore; we need to convert the AC main’s power received at our homes into DC in each of these gadgets to run them. Furthermore; it is only AC which can be stepped up and stepped down so easily. We can use a semi conductor on pn junction diode and convert AC into DC.

Full Wave Rectifiers
The full wave rectifier consists of two diodes and a resistor, as shown in the fig (a).

The result of this change in circuit is illustrated in fig (b).
In the fig (b), the output from the full wave rectifier is compared with that of a half wave rectifier.

Full Wave Bridge rectifier
The bridge rectifier is the most commonly used full wave rectifier circuit for several reasons
(1) It does not require the use of center-tapped transformer, and therefore can be coupled directly to the ac power line, if desired.
(2)Using a transformer with the same secondary voltage produces a peak output voltage that is nearly double the voltage of the full wave center-tapped rectifier. This results in the higher dc voltage from the supply. 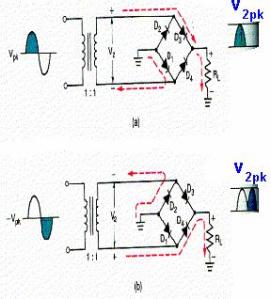 My Laboratory Experiment
I have created all the three rectifiers on a single board. It was a real fun for me. May be when I show the circuits; you people will not recognize that which circuit belong to a type of rectifier.  I connected a 6V transformer to each of the rectifier and then observe their output on oscilloscope. The output produced was according to its operation. 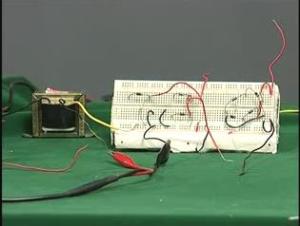 Figure: All the three rectifiers on single board

Thevenin’s Theorem
The Thevenin’s theorem is a useful theorem by which a complex circuit can be reduced to an equivalent series circuit consisting of a single voltage source (Vth) and a series resistance (Rth) and a load resistance (RL).
After creating the thevenin’s equivalent circuit, we may then easily determine the load voltage (VL) and the load current (IL). 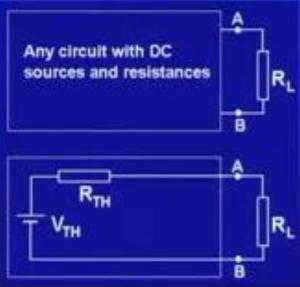 Example
Find the thevenin’s voltage; thevenin’s equivalent resistance and then voltage across the load in the given circuit.

Thevenin’s Voltage
Remove the load at terminal A and B. Now no current will be flowing via R3. With no current via R3, there is no voltage drop across R3. Therefore; Vth = VR2 . 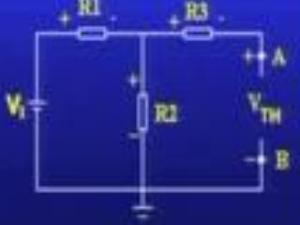 This is the thevenin’s equivalent voltage. 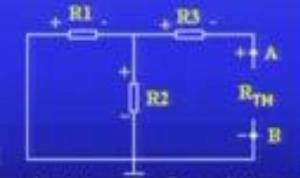 The equation for Rth is; 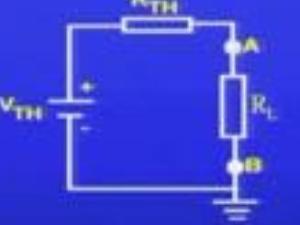 Experiment
Below is the circuit for my experiment of thevenin’s theorem;

In the circuit shown; the voltage across the resistor using ohms law are IR1, IR2 and IR3.

The (+) ive and (-)ive for V is different from those for the resistors. The (+) ive is shown at a higher voltage. 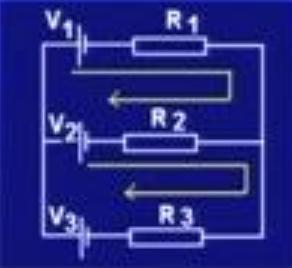 Figure: My Circuit for KVL

So the total voltage drop across all the resistors is approximately 6V.

Why I got approximated voltage drop for resistors?
The reason is because of resistors tolerance value.

Bread Board
Bread board is used for construction of various circuits for testing. This is very useful since here; we don’t have to solder the different components.

Figure: Bread board for circuit preparation

Digital Multi meter
A multi meter is indeed a multi meter. It can measure dc and ac voltage, current and in addition resistance.
In some recent multi meters we can measure even frequency and capacitance. 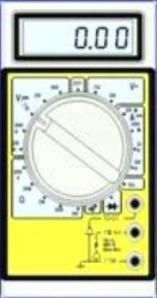 Testing the bread board
We can do that by using a digital multi meter (DMM) and a couple of wires. Insert the wire in to two holes between which you want to check the electrical continuity.
Use the DMM in resistance mode and connect the two probes of the DMM to the two strips of wires.
If the resistance shown is zero then they are connected. If the DMM reads high resistance then the two points are dis-connected electrically. 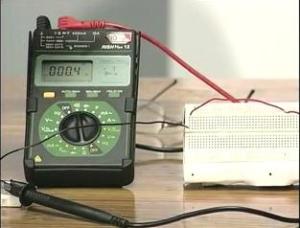 Figure: Testing the bread board for connectivity (zero resistance)

Power Supply
For performing experiments, we need a power supply which can provide the necessary power to activate the circuits. The power supply, we will be using here as the following outputs;
0 to 30 V variable DC voltages, 1A (max)
The voltage can be read on digital display panel. 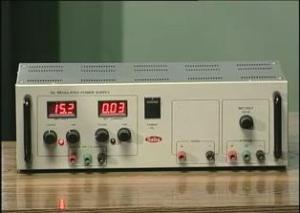 First Integrated Circuit(IC)
Jack Killby of the Taxas Instrumentation and Robert Noyace of Fairchild Semiconductors are the inventors of integrated circuits.
Integrated circuits can be found in almost every modern electrical device such as computers, cars, television set, CD players, And Cellular phones etc.
Use semiconductor not just for transistor and diodes but also for resistors and capacitors, putting every thing on the same substrate.
The bulk resistively of the semiconductor and its diffusion doped layers could be exploited for fabrication resistors; p-n junctions could provide capacitance. 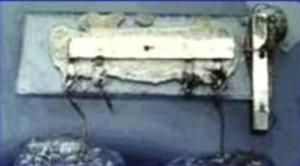