Digital Clock
In digital clock circuit, the 50 Hz, 220 volts ac main sinusoidal signal is shaped into a 50Hz, a 5 volt square wave signal. A divide by 50 counters divides the input 50 Hz signal to a 1 Hz signal. The seconds, divide by 60 counter counts up to 60 seconds (0 to 59). The minutes, divide by 60 counter also counts up to sixty minutes (0 to 59). The hours, decade counter counts from 0 to 9. The flip flop connected to the output of the decade counter is set to 0 or 1 to represent hours from 0 to 9and 10 to 12 respectively.

Simulation of Digital Clock
The following figure shows the simulation of the digital clock;

Full Wave Bridge Rectifier
The bridge rectifier is the most commonly used full wave rectifier circuit for several reasons
(1) It does not require the use of center-tapped transformer, and therefore can be coupled directly to the ac power line, if desired.
(2)Using a transformer with the same secondary voltage produces a peak output voltage that is nearly double the voltage of the full wave center-tapped rectifier. This results in the higher dc voltage from the supply.

When D1 and D3 are on, D2 and D4 are off and vive versa. This circuit operation is illustrated in the fig.
The current direction will not change in the either condition.

Simulation
The following figure shows the simulation of 741 operation amplifier;

Serial Communication Based Calculator
Implemented a serial communication based calculator using Proteus. The PIC18F871 PIC was used; it was connected with 20 x 2 alphanumeric LCD. The LCD was used to display the numbers input by the user from a PC connected via serial port with the microcontroller. The below the schematic of the project;

Schematic Design
The below is the schematic design of the project;

PCB Design
The following shows the PCB design of the project; 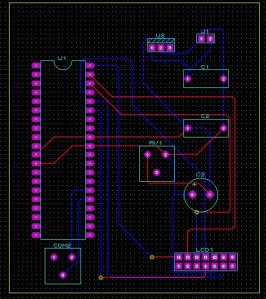 We have created some sound effects listed below:
1: Echo
2: Delay
3: Multiple delays
4: Multiple echoes
5: Fade in
6: Fade out

1:ECHO:
The Phenomenon produced when a sound reflects from any obstacle delayed by 100 ms.Or in other words, repetition of a sound by reflection of sound waves from a surface.  Echo rises in Communication systems, when signals encounter a mismatch in impedance. 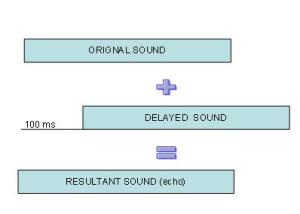 ALGORITHM:
We are reading a sound clip from a file into a vector, then we produced the delayed version of the sound (delaying it by 100 ms),then we add the two vectors obtaining the resultant echoed sound clip. 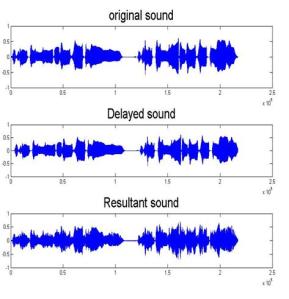 2: MULTIPLE DELAYS:
When we add up a sound clip with itself each delayed by different factor,the resultant is multiple delayed sound effect.

ALGORITHM:
A) Read a sound clip from a file
B) take input from user number of walls , Nwalls.
C) Input distance of each wall into  Distance vector
D) Calculate delay of each reflected signal into delays vector.
E) Produce the delayed version of original sound by delaying it by delays[i]
F) Sum up the all delayed vectors. The resultant is multiple delayed signal.